You probably thought a remake was either a quilt or a piece of furniture, not so, it is a tray.

I purchased this tray about ten years ago, and have truly loved it, if you can love an object so.

Well...apparently, my grandson loved it to because when  he was able to stand he started picking at the bottom as you see here. 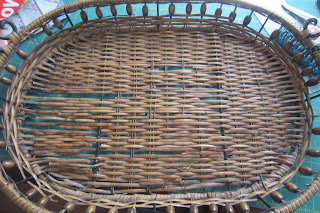 I was telling my husband that I would probably have to throw it out and he suggested that I do something with the bottom.

I kept my eye out for a large piece of cardboard (actually two large pieces) which I came into possession of last week.  Then today as I was looking for a quilt top, (which I found four that need to be quilted...sigh)...I came across two table runners that were never finished.

There you have it.

I cut out the cardboard,

Cut out some batting, 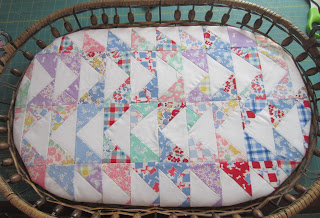 Now I have my tray back.  I took it to my grandson and told him to not ever bother it.  My husband said, good luck with that.

He usually doesn't bother anything, not even the glassware I have around the house but he loved this. 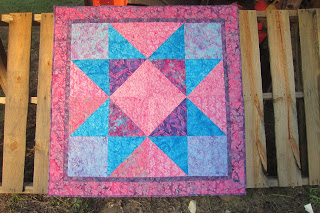 Here is a star quilt using 10" Island Batik Stacks, this line is "All a Flutter."  I just love this fabric.  There is enough left over from the stack to do another one.

You have seen this quilt several times on my blog.

You can find the tutorial at Diary of a quilter 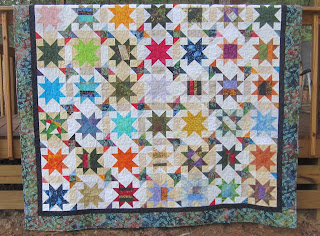 If you were wondering what I was doing with all of those star block...no need to wonder any longer.

This quilt is 80" x 92", this is the one I quilted on my domestic machine since I can not get to my long arm. 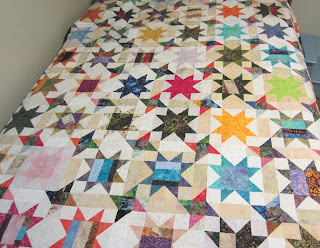 Here it is on a queen size bed....you can't even see the border.

It really wasn't that hard to quilt.  I just started on one side, meandering to the middle (the middle was the hardest part).  Keep in mind that when you are doing a project this size you have to fluff and fluff....you don't want a drag or you get sad little lines which I confess I have some.

Once I got to the middle, I flipped the quilt around to where I was working from the middle out to the other side.

Many many moons ago, I started out quilting on my machine in the middle but I soon found out that that technique did not work for me.  I start as I stated on the side and work my way to the middle and flip and work from the middle out. 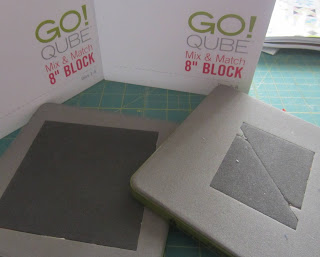 To make the stars I used my Accuquilt Go cutter and the Go Qube 8", the 4 1/2" square and the half square triangles.

Truly this is the fastest and most accurate way to do half squares.  The worst part of doing half squares is the squaring up when you are done sewing them.  With the Accuquilt Go, there is no squaring up which makes it a breeze to make these. 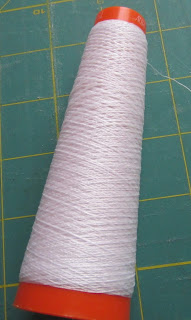 Then in this quilt I used the Aurifil White 50 weight thread as you see above.  Also, you can see that I am almost out.....
Just yesterday I used a different brand of thread and as I was quilting the thread kept breaking, I have to be honest with Aurifil my thread does not break.  Love it! 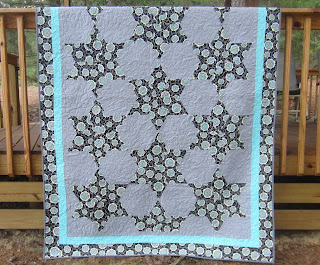 Last but not least I made this Quilt from Missouri Star Quilt Co magazine "Block", volume 5 issue 4 of 2018.  I used the rhombus ruler that I also purchased from them.  If you see the post below this, you will see a different version of this.

I am sure most of you know it is so much easier to post on facebook and instagram.  I have been bad about posting all of the things I am doing on my blog.  It is also easier to comment on those social medias.  I have even noticed that people come by but don't comment.  I promise you, if you come by and have a blog, I will come by your blog and comment as well.

Just as a reminder, this Awesome blog hop is going on right now.  Do go by, there are a lot of giveaways and fun ideas.

You have been busy! Kuddos to you for doing a gueen on a domestic machine....I don’t think I ever could do it again!

Your basket tray is a real beauty now! Clever lady! I like all your quilts too, especially the Island Batiks star.

So much beautiful work, Barb, you are a wonder! I must comment individually on your tray that needed a repair. It’s perfect! The fabrics look vintage and are a great match for the wood of the tray. Well done!

I was positive I left a comment last night, but I don't see it, so here I go again... Your basket tray looks fantastic--what a great fix you did, you clever woman! I like all your quilts as well, especially the Island Batik star!

I love your "save" for the tray. I think that maybe the extra cardboard will keep the grandson from "picking" at the seams.

Cool fix for your wicker tray, Barb! Repairing it with an unfinished table runner got the runner out of storage and on display in a useful way. It looks so pretty. I do love your stars quilt. With a walking foot quilting can start anywhere, go in any direction and end anywhere. Poo on the quilt police and quilt rules people have made up over the years. Out the window they go with me. I had heard many horror stories of machines not liking threads. I am SO happy that my machine accepts any thread I throw at it.

I stick with blogger as just hitting a “like” is so impersonal and most posts I see on facebook and instagram are full of those easy to hit likes. And short one to a few words as a comment. Which also cross over to blogs. I do love a good story behind a finished piece of artwork. But I don’t see that kind of info on those instant social medias. I’ve tried them but I didn’t get the instant “gratification” that so many others seem to favor. I guess I’m just too old-fashioned that way.

Your revamp of the tray turned out really well. I like it better than the original. :)
Great star quilt, and well done on the perfect size for the bed.

You are so creative! Love what you did with the basket.

No squaring up? I gotta know more!!

You have been super busy! Love the tray fixed up. Also love the star quilt. I am glad you still post on the blog because I like to read blogs a lot! Keep up the good work! K- lkw2x6-apq@yahoo.com

I’m with Carol, did leave a comment but it went astray, I guess. So here we go... I LOVE how you saved the basket! It’s very unique and worth saving.

I’m with Carol, did leave a comment but it went astray, I guess. So here we go... I LOVE how you saved the basket! It’s very unique and worth saving. Blogging is also unique!

Your tray came out just lovely! It’s so rewarding to give something you love new life. As always, your projects are motivational, especially the Star quilt!

What a great way to fix the bottom of that basket! Even if it wasn't broken, it would be a lovely way to add some color! :0)