Several yeas ago my sister gave me four shirts of her husband who passed away.  I told her I could make some doggies for her grandchildren.  I can't find the pictures of the doggies I made but all together I made five doggies.
Like this one you see here made out of Island Batik Fabrics 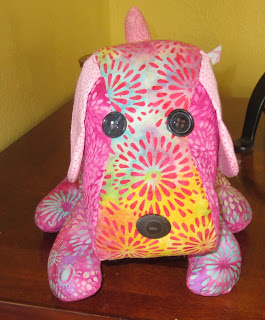 She didn't know I was making this for her for Christmas but here is a pillow for her bed, the buttons and applique are off his shirts.  She was really touched by this. 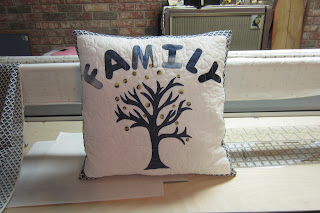 Then they have a grandson that is named after her husband and he worked for the Railroad, so I made this quilt.  The applique is out of his shirts using the Accuquilt Go Train die. 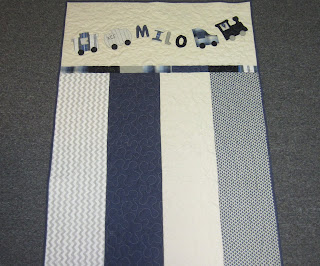 So out of four shirts I got 5 doggies, one quilt, one pillow, and one pincushion made from his cuff.

You never know what is going to happen so I had a week to do whatever I wanted at the beginning of Dec. so I rushed and got all of this done plus a round table cloth for my son and his wife which I can't find the picture.....too lazy to go and get.

Thanks heavens, we ended up keeping our grandson for a week, my mother fell and was in the hospital, and then m sons came for Christmas which I was running to and from the rehab for my mother.  She was in the hospital for four days and then was taken to rehab and then....guess who gets sick?  You guessed it...no fun during this Christmas season.  It was good to see the boys and their wives.  My fifth son and his wife cleaned the house before they left....I thought that was so sweet.  Am I luck or what?

They are all beautiful gifts, you did great! I'm sorry about your mother I hope things are improving and you're taking care of yourself.

Your doggies are so cute. What a great use of those shirts to save memories of someone who has gone on.
Sometimes we get sick to remind us that we need to rest. Remember that you can't (and don't need) to do it all.

Oh gosh, Barb, I hear you. I have been on the same train ride this December with my mom after me having pneumonia early in the month. Did December really happen???

I love what you did with the shirts. I can imagine how touched your sister must have been.

Such wonderful shirt things. Sorry to hear about your Mom. I am sick at the moment too. I think it is just nature's way of slowing me down.

What a great way to capture his memories and to turn them into huggable memories to be treasured for many years to come.

Wonderful things made from the shirts. I'm sure they will mean a lot! Too bad you were so busy and sick on top of that. Good sons make up for it!

Pretty ambitious of you! Bet there weren't many shirt scraps left!