This octopus quilt has been a hot item lately...

.I haven't counted how many I have done in the last two months but there have been quite a few.

I recently got an order for this octopus and they wanted the pink and brown polka dots like the one they saw.

Thanks heavens I know where to get more fabric.

and was able to maneuver the octopus on the pink polka dot scraps to where it would work.

Well...maybe it was the late hour,

and I was working by a lamp across the room.

What ever the reason.

I fused the octopus on the right side of the fabric.

If I were a cursing woman, you would have been able to hear some not so nice words...but since I am silent in that area I just called myself all kinds of names (don't know which is worse).

So...the next morning I make my way to the fabric store to buy another yard. 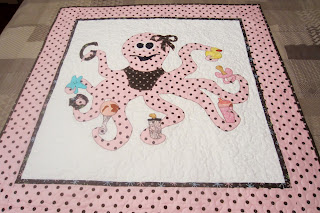 Other than that, this octopus went together like a breeze.

I don't think I have ever had a quilt go together so effortlessly.  It was a pleasure.

Maybe it was because I did it in between a project I am doing....have been doing...seems like I have been working on this one project forever and can't wait to show you.

Anyways, when I would get bored....I would pull out the octopus...and work...put it away until it was needed to chase away the monotonous routine....

The one receiving this is Samoan so I used some of my Samoan fabrics for the back. 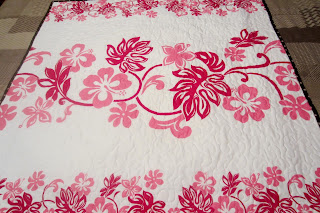 Just a plug for this octopus pattern,  if you would like to purchase it, just email me.

I can imagine the names you called yourself, Barb. Grrr. LOVE the backing fabric!!!

Your Octopus looks wonderful in that dotty fabric. I love it.

I have to laugh because I have fused the right side (which is the WRONG way to fuse.) Your finish looks great.

I have always loved this pattern but I think this is the best one you have ever made...I just love this color combo! Super cute and the backing is perfect..they will love it!

So, so cute! blessings, marlene

I love the Samoan fabric on the back.

Really cute , I am waiting to see the front of the quilt you are working on but I love the back.
Blessings Sandra