My husband purchased this serger for me on one of our trips from Amerika Samoa.

I was only able to do one stitch.

At one time I even tried a new stitch and it worked okay.... 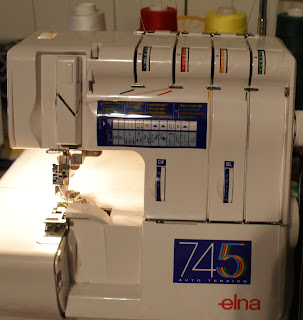 But this inquiring mind needed to know!!!

I have wanted to take a serger class when we moved here to San Antonio. I wanted to learn to use my serger better. I looked into classes, wanted to go.....but just haven't.

Until one day I was on Sew Cal's blogwww.sewcalgal.blogspot.com where she posted about Craftsy's classes.

wanted to do it.

and then just took the plunge.

I am now taking an online serger class and I can not say enough good about it.

I am so thrilled.
I was going to wait until I had more time....but when would that be?
Now I just take about an hour a day and not ever day.

So far I have done three segments....and the things I have learned.
I was frustrated at first because some of her terms did not match the terms in my manual but once I figured out what she was talking about....the heavens opened up and the light bulb turned on.

and no, I am not affiliated with them in any way shape or form except for taking the class.

I think my husband is wanting to get rid of me. .  So...in the temporary room I am in the light bulbs went out and so he replaced them.  He was going to put the cover back on but I wanted it off.

So he went and put it in the other room.

Well....the light was right above where I do all of my cutting.

My son who resides in there right now said about three in the morning the cover comes crashing down and sends shards everywhere.  Scared the lights out of him but he said.

Great . There is never and end to learning. I still want to learn how to load new embroidery patterns to my sewing machine rather than the few it came with. perhaps there is a class....

Thanks for the heads up on the Serging class over at Craftsy! I have taken lots of classes with them but not that one, so I am heading over there to check it out! Glad the light didn't fall on your head!

I've always been intrigued by sergers.
Would love to have one, except would I use it enough to justify the cost.
And, i agree with you, Barb, Craftsy classes are great. There are several FREE workshops available also. They cover various crafts.

I'm so glad you are enjoying your class. But, be warned, you may be come like me....I'm totally addicted to Craftsy. Initial class was just curiosity, but was so impressed with the format and how much I learned, I started taking more classes. Now, I snag them whenever I find them on sale (and sometimes when they are not on sale) and take them at my liesure. Also love to repeat certain segments, to refresh my mind. To me, it is a great value.

But, now you have me wanting to take their serger class and get a new serger. hmmm...maybe this Fall!

Good for you. I've heard of Craftsy but never checked out their classes. I had a serger one time but I gave it to my sister-in-law as I could never learn to thread it. Keep an eye on V. LOL

I"ve heard good things about the Craftsy classes! Glad you are enjoying yours. I'd like to own a serger one day too!

I think this will be the way of the future as far as purchasing patterns and taking classes. I've heard nothing but good things from them.

So glad the light bulb ghost didn't get you!

I'm glad no one got hurt! One of these days I'm going to take a Crafsty Class!

Lol, that is so funny Barb. Thank goodness your son is ok too.

I love the Crafsty class, they are great to learn on your own time. I have at lest 4 class I have already and have also done the block of the month. I alwasy wait for discounted classes instead of paying full price. I have two sergers and like you I only use the one stitch, now I running over there to see about the serger class. Have fun with the serger.

It is always exiting to learn new things...I am just glad it wasn't a new first aid skill!

I doubt anyone in their right mind would ever mess with Barb Gaddy. She has way tooooo many friends and we'd all come hunting ourselves!

So glad to hear the Craftsy Class is going so well...that is wonderful news.

Ha! Just dragged mine out froma 15year blanket of dust!

I love taking Craftsy classes. I have added the serger class to my wishlist.
Tell Mr. G if he offs you he will have a lot of bloggers showing up to claim your stash - so it may not be worth it! LOL

I am taking a few of craftsy courses. The two free BOM's and there other free ones to. I also signed up for the free motion quilting one and I am thoroughly enjoying it. Best part you can do it in your own time.

I must investigate this further . I only do straight overlocking or serging as you call i

Wish my internet could allow for this! I have my new serger in the closet. Made the mistake of untreading it!! YIKES! Want to take a class in a shop in big city. Hope to be able to when weather is warmer. Glad you were not hurt with light cover!!

When my ship comes in, I will definitely head over to Craftsy! LOL (Shading eyes) Is that it, in the harbor?
Not a chance! So VERY glad that neither you, nor your son, was hurt by the Possessed Light Fixture in its rampage..... :)

I love Craftsy, too! How great you found a class to help you!

Husbandssssssss. I'm talking a class on Annie's. A FMQ from Wendy on Ivory Spring. I didn't realize you lived in SA. If you haven't already, be sure and eat puff tacos at La Casadora on West Ave. It's in a little strip mall and is the best. I've eaten there for the past 30 years or more.