HAPPY BIRTHDAY TO ME...... GOODIES....NO THERE IS NO MAIL LIKE FABRIC MAIL.

Before I show you the awesome goodness, I wanted to show you my Anne of  Green Gables Quilt.
I just love the fabric by Riley Blake.  I actually have all of the squares put together just no borders yet, gonna let my sister catch up some. 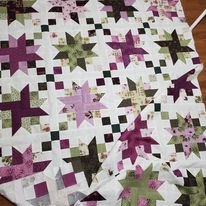 Okay, the next pictures are my birthday hall from Inchworm fabrics.  Most of you know this is my sister, Jeanette's store.  I actually purchased some fabric from Quilt in a Day but that has not come in yet.
So without further jabbering I am going to show you Java Batiks from Inchworm Fabrics 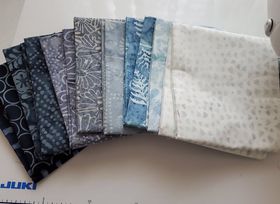 Stone Java Batik Bundle
Did you know you can get a 10 fat quarter bundle of Java Batiks for 21.00 in her store? 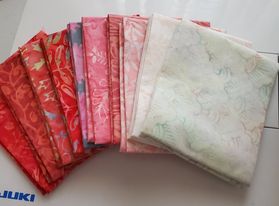 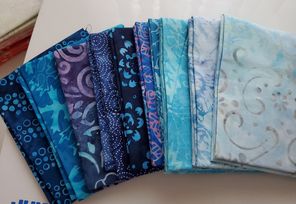 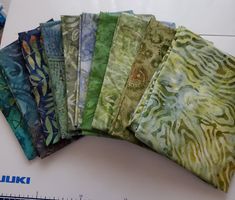 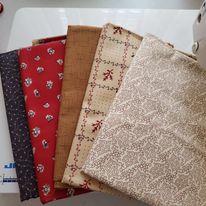 Seeds of Glory 5 yard bundle by Stacy West of Buttermilk Basic Designs Co. for Riley Blake
BE STILL MY HEART...... I can not get enough batiks to save my soul
I wanted to tell you about my Juki sewing machine.  I have had it for maybe 3 years.
It actually was acting funny from day one.  It would go slow and then fast, finally it started shutting off.  It was so bad that one night I just knew it was dead.  I was really disappointed because I did not want to purchase another machine and well.....it was fairly new, and I was thinking I just ran it into the ground.
Then next day it did run but would shut off again.  So I unplugged it and put it in another socket of my power cord, didn't work.  So I was just going to take it to the shed and  that would be that.  But.....on my way out I decided to try it in the wall socket in the dinning room.  Guess what, it worked.  So I came back to my sewing room and put it in the last plug of the power cord, I guess that is what you call it, the cord you can plug several things into.  It did work but still had issues.  I was talking to my husband and we both decided to just plug it into the wall.  Low and behold it worked and it worked good.  No more slow then fast...no more going out.  So all along it should have been plugged into the wall.  I am so happy, it works better than when I got it because it has always been on a power cord with other machines and the iron.
Well....my sister, Beverly, was telling me  her Juki died, her's was a little older than mine.  I was so excited when I got my working again that I called her.  She called me back and said her machine was working and to this day, it is still working.  Yeah us!!
at 8:04 PM

Your quilt is so adorable! I love how the different fabric values make the block look different.

So glad your Juki is working now. It's a good reminder that surge protectors etc fail.

We do love our batiks. (grin)

I am glad to hear that your Juki is working well. I love my Juki for FMQ especially. I also love that it will work with pretty much any thread that I put on it. (Mine is a TL-2010)
I had no clue that the surge protector strip could cause such a problem. I have mine on one but it hasn't done that ...at least now I know what to do if it does.

This makes me want to go shopping....and I am DETERMINED to use what I have!!

Batik fabric make the best birthday present, and those are beautiful! Hope you had a wonderful birthday! :0)

Happy Birthday! What was wrong with your machine? Glad you got it fixed!

Yay for the simple fix. Yep some machines just work better plugged directly into the wall. The anne of Green gables quilt is gorgeous. Happy Belated birthday and you got quit the haul there.

Oh gosh you scored on those pretty batiks!! And at a really good price!

Happy Birthday to you! Lovely haul of fabrics and those batiks are soooo luscious.

Your quilt is beautiful! Those are some really good looking batiks and they are a really good price. Happy birthday. Mine was last week too. Interesting find about your sewing machine. I'm sure you will enjoy it all the more now.

Hello Dear Friend, I am so happy your machine is working again. Happy Birthday even if it is late!!!! I love your stash and all your quilts you do, but most of all I love your family and how you take such great care of them all. Have a most beautiful day and when you have time please send me your address in PM. Many hugs, Marie

Beautiful cushions, of course, it's really fun to give such a beautiful gift!