As most of you know, Minky is a hard fabric to sew.  I have always avoided it at all cost.

Yesterday while in Walmart I received a call from two friends.  They were trying to sew two minky blankets but had nothing but frustration.

Their machines wouldn't work, the fabric stretched.  Fabric stretching was the main issue and both were so frustrated.

I told them that I had little to no experience with the fabric and that I have never wanted to sew with it but they said I would fair better than they have.

Forty-five minutes later they are at my door with fabrics in hand.
You could feel their frustrations, I have been in their shoes before and have threatened to throw a project away for that very reason.

Before they arrived I called my sister, Jeanette, at Inchworm fabrics, and asked her feeling about minky and how she managed to sew it.  She told me to put the minky side down when sewing so the feed dogs could ease the fabric and not pull like it would if it were on top.  She also said to pin it liberally.

I had asked her if glue would help.  She had no clue.

So...first order of business, square up the fabrics.

Sorry, I didn't take any pictures, not even of the finished items.  So I am going to assimilate it with the scraps out of the bin. 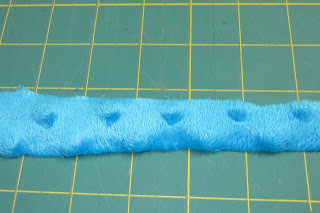 The backing fabric, placed on top of the minky with right sides together.

They were doing the pillow case method...where you sew all sides but leave a whole open to pull through. 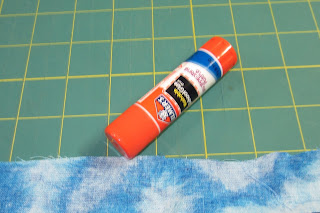 Trusted Glue...oh...you see where I am going with this?? 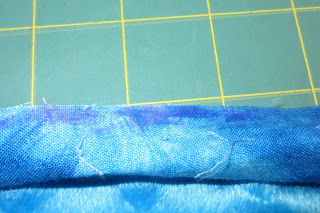 I had them glue the outside of the backing fabrics, not the minky and then press it down.
See here where there is a strip of glue?

Then I had them pin it just in case and for more stability.

Even if you get glue past your sew line, you can always pull it apart before you do the top
stitching.  It pulls apart quite easily.

I had noticed in some spots the glue was a little wide but knowing what I know and if
I were doing it by myself, I would just use a strip as you see above not a wide strip.

I have to tell you that I had no issues what so ever with stretching and it took no time at all to finish
these two blankets.

I am no longer afraid.

Fear has left the building.

Have a fantastic day, the sun is shining here and it is almost 70 degrees...

Thanks for sharing your insights on working with Minky. I've never worked with it, but have been wanting to try. I'll definitely use your tips.

What great tips. I have never really felt the need to sew with Minky but now know it is possible with a little knowledge.

Do I see a quilt in your future with a minky backing?

Great tip! I have only done one baby quilt with Minky. I used basting spray to make my quilt sandwich and it went well, but I would never try it without glue.

It always feels wonderful to master a technique or supply that we have avoided for so long.

Barb to the rescue!!! Yeah. Thanks for the tips. Did you also use a walking foot or did the regular foot work okay?

I helped a friend back her quilt with minky just two weeks ago. We used spray adhesive, no pins, and once we got used to handling it under the needle, it went smoothly. I swore I’d never use it, but now I’m thinking twice about that declaration, as it made a lovely, soft, and cuddly quilt. Thanks for your tips!

Love the look of minky but it is such a messy fabric haven't used it in years when it was first popular , thanks for the input I will follow that if I use it again. Have a beautiful Sunday. Hugs, Marie

Some good ideas, but I'm not trying....giggle.