Some of you have seen this Clam Shell runner from a while back. It is made from the Accuquilt Circle die, using the middle circle (3" in diameter)

I am working on this quilt using the circle die again but using the 5" diameter circle.
Trust me, no fabric was wasted, what I didn't use for the large circle, the middle circle was used and what was not used for those two, the smaller one was used...very little waste. 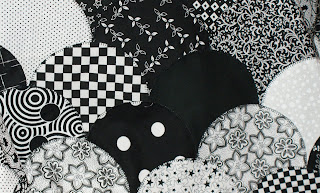 So let's begin. For the quilt...I cut a 5" strip, this strip will be as long as you want your quilt wide. You will need a glue stick.

Lay out your strip. Take your first circle and crease the middle

place the crease on the bottom of the strip, like you see here. 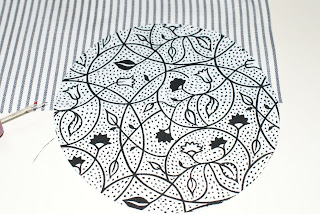 you can see here where it is creased. 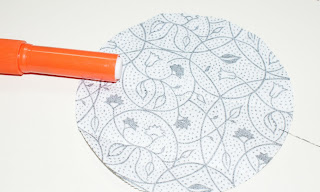 Then you just glue the top portion of the circle down on the strip of fabric. 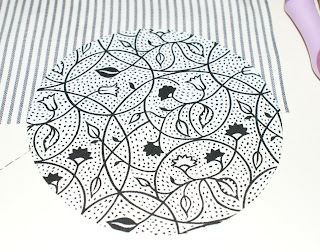 Then you do the same to the next circle, you will place the circle next to each other, crease touching. 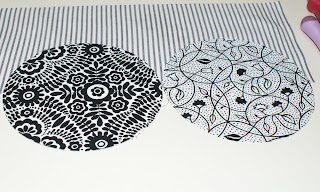 You will do this all the way down your strip. In this case I have nine circles, the next row will be eight....then nine on the third row, eight on the fourth etc.

Then you will blanket stitch around the circles to the end of the strip like you see here. As you can see, this is the back of the strip.

Now you will go and trim the back like this.

For your second row, as mentioned above, you will only have eight circles. You will crease the middle and if it is helpful, crease the middle both ways so you can match the middle crease to the top of your quilt (which will be inbetween two of the above circles)...

This is what the back looks like after the second row. 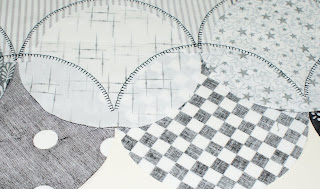 This is what it looks like after you trim off the back...now sometimes the glue has to be seperated from the fabric so you can get a nice cut...but that is not a big deal. 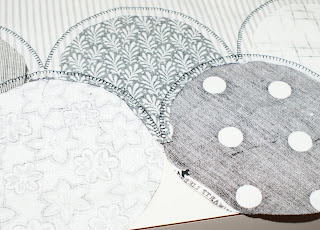 I have not finished the quilt yet but what I did on the runner was, I cut the sides right down the middle of the circle, and bottom. Added a border to each side and bottom. Then I just did a straight stitch quilting around each circle, that is what gives it the puffy look.

For the quilt, I am thinking of cutting strips for the side and bottom but not cut the circles down the middle...I will glue the circles onto the strip and just blanket stitch around them....that is my plan as of now. I still plan to do the same quilting, straight stitching around each circle.

You will end up with alot of scraps.... This could be considered very wasteful...and you are probably thinking that using the go to do clam shells is a waste of such fabrics.... 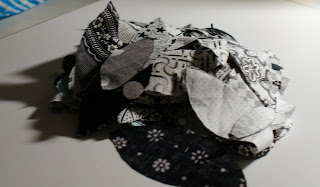 Take a look at this runner...do you think it is wasteful now? It is made from the scraps off the back of the clam shell. I have enough scraps to make more of these runners or come up with something new.

Good point Barb, wasteful is only a lack of creativity.

I love that! It looks easier than doing it by hand, that's for sure. I do like clamshells and have seen other bloggers making them by hand. Don't know if I'll do this or not, but will definitely keep it in mind. Thanks for the tutorial!

Great use of the scraps Barb! I'll be getting the circle die soon and this is a great project. Thanks for the tute.

What a clever idea!!!! I like how you used the scraps to make the flowers.

What a great way to do clamshells! You're so clever! :0)

Very good tutorial. I love both tablerunners but the one you made with the scraps is my favorite.

Oh Barb. That is very clever! Both the way you put the clamshells together and the way you used up the scraps. Very informative; thanks for sharing!

Clever clamshells and fabulous use of scraps. Love the black and white theme! xo

Thanks for this little tutorial , it sure is a pretty runner and I really love how you used those scraps to make the flowers , cool!

I love both of them. Very nice.

I love this tutorial. So great!! And I love how you used the scraps. This is definitely a winner. Thanks for sharing it with us. Hugs Ariane

Great tutorial. Love what you did with the scraps! You are so creative.

Neato Tut! I have an antique clam shell that hangs in my dining room made by my Great Grandmother Nora.
I always thought about making one but was daunted by the hand work. Now I can just use my GO! and circle die! Thanks Barb!

Genius! I love how you've done this. I don't like hand stitching. So I don't do it. At least not very often, but this looks like a great idea to me. And the go cutter is definitely the way to go!

Both runners are so cute. It really makes me want to get the circle die for my Go Baby.

They both are cute. It makes me want to get the circle die form my Go Baby.

Wow,I love how you use scraps.Thanks for the tuto.

Thanks for the idea, Barb! The pattern is beautiful and so easy to make with circles!

Great tutorial! The clam shell runner is wonderful but I think the left over runner is so fun and whimsical. Great use of scraps!

Don't you just love proving the quilt police wrong! I will definitely be doing this one! I love it! And your second as a table runner is just awesome! Great jobs well done......

Love it! Thanks for showing me how to do this.

Love it Barb...thanks for being so creative :) Hugs Vicki x

I love it. You are so creative. I will never look at a clamshell template again without thinking of this.

I was wondering how you create beautiful Clamshell design. Great tutorial. Love it. Excellent. And I love what you created with the cutout of the clamshell pieces. Very creative. Love them both. I look forward to giving this a try. Thanks for sharing & inspiring.

That's so clever Barb. Now, all I need to do is persuade my machine that together we can do a nice blanket stitch. Oh yes, and get the circle die!

Barb, thank you so much for this tutorial. you are amazing - I love clamshells and this is a perfect quilt to make with the circles from the GO.

Great projectS from your circles.... does your brain ever stop making up new ideas?
Hugz

Barb! I LOVE this!! It is so on my "to try" list! Thank you for showing me how. I may start with a pot-holder!!

I can't decide which I like best, the clamshells or the flowers. Isn't it nice that this tutorial gives a person both!

Great thinking and terrific creating, Barb. I love it. Thanks for showing us how to do it.

Fantastic! I couldn't imagine myself even contemplating a clamshell design...but now I think even I could do it... and 2 designs from one - more genius!

Coming to this late but thank you ever so much for this. I got back to my quilting after five months. A rail fence quilt for a baby due in November.

love the clamshell runner but the *leftover* runner? fabulous!! thanx for the great tutorial Barb

Sorry I am slow, I am playing catchup. I love what you did with the circles. It is so neat. Like the black and white fabric. You come up with such great ideas.

Great tutorial, and a very doable project. thanks.

I've been wondering if I couldn't make a clamshell quilt with circles. Thanks for the tutorial.

I've been wondering if I couldn't make a clamshell quilt with circles. Thanks for the tutorial.

Very nice post. I just stumbled upon your blog and wanted to say that I've
truly enjoyed browsing your blog posts. After all I'll be subscribing to your rss feed and I hope you write again very
soon!