Well.....He is home....and I am sooooooooooo thrilled. It did not cost me one penny. I was shocked! I was geared up to pay through the nose because just for them to work on a machine is 100 dollars.

Now I am afraid to use it. She did mention something about the thread is not suppose to come through the needle plate (what no tail)....and said that I should use the automatic cutter each time but not with the foot up (that was if I forgot and then remember while the foot was up and went to use it). So to all of you who want one and was scared off....I would say it is the ignorance of the operator.....broken needle and all. 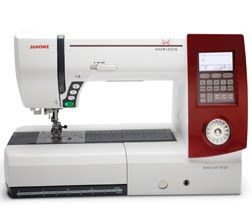 Maybe if I had had a class or two this would not have happened. although, it was a needle breaking that did it.

I just want to say that "A Stitch In Time" here in Fredricksburg, VA is awesome!!!

So what am I doing while the boys are home? I am filling their orders for their favorite foods (for some reason Mr. Burger King lives here and they have to have it their way)..... this is all of my son's favorite and thier biggest request. 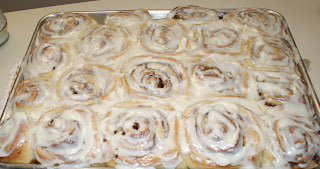 Picture is a little yellow but my third son loves these. Yes...all by scratch. My husband says I spoil them....I won't tell you what he has been doing.....nope...I won't dime him out but he is just as bad, if not worse. 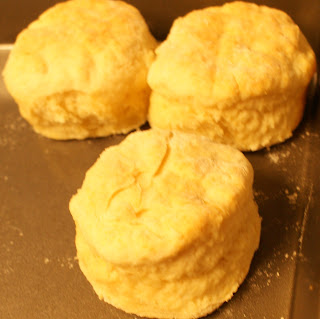 Tomorrow it will be lasagna. So not much is getting done besides cooking and doing the dishes.... I am working on the second "Be Attitudes" blocks while the men are watching James Bond....It is not like they haven't seen this one 100 times. I am sure they can recite most of the dialogue. Maybe they just want to be James Bond, what man wouldn't, women flocking all over them, money, cars, guns.....yep....I can see it. Maybe I want to be Wonder Woman, with that waiste line and long legs...what woman wouldn't? A fourth son comes in tomorrow!

Oh, that is just wonderful news! You just never know...do you?

Glad to hear Mr. Big Guy's repairs didn't cost you! Nice surprise and now you have $100 for fabric!

I have been eyeing of those machines, have fun at the classes, I did that when I bought my Janome and it was great to pick up all the little tips and hints you don't find in the manual (perhaps cause I didn't read it much either!!). Lovely to have your boys home, you spoil them beautifully. xo

So glad Mr. Big is back and YAY for Janome. Oh your boys are eating good. Oh what fun if you had ratted the husband out. lol

Glad you got it back. Maybe the classes will help not have any more boo boo's. I can take them too, for free, just WHEN?? is my problem so I am being super duper careful and reading the manual and the internet with each new thing that I try!

Oh, and no tail when using the APC but do you get to use it anyway? Because for stitch 93 we can't use it so then I think a tail is fine.

glad you got the machine back and even better that you didn't have to pay!

Oh yummie, lasagna..love that stuff. Glad it didn't cost you a penny to get it repaired. Hugs and have fun with the boys home.

Oh, I am so glad that they made it good for you. I rather thought they might.

I'm not loooooooooooking at that food though.

Oh geez! I am drooling now looking at those glorious rolls.

Mmmmmm!! Drooling over here, too! Pass one down to Florida!

So glad it all worked out well for you Barb..
I thinking about this machine...but when I read what happened, I was a bit put off..
"Alls well that ends well"...happy stitching now..
Yum, yum...cakes!
Julia ♥

OMG! I am gaining weight just looking at your goodies!
I test drove one of those Janome Horizons. They had a great deal on it, but it was still too rich for my blood. Maybe after the kitchen reno is finished. There will be another Creative Festival in October. Maybe I'll get one then.

Glad you got it back and no charge!

I think the spoiled should be doing those dishes!!

Glad you got your machine back. I hope the classes will help you understand how this machine works. And then sew, sew, sew!!!

Glad to hear your having great time with your boys. And am also glad your machine didnt cost you anything. Classes are always good.

Mr Big Guy aside! Calories are in!! Those cinnamon rolls and scones(?) are my favourite!!! Lucky boys:) Go ahead, spoil them rotten. They will appreciate you more ;)

I love that you got your machine fixed for free. Yippeee! If your kids wouldn't be spoiled, then they wouldn't be fun to have around. Enjoy them while they are there, and spoil them rotten!!

Oh Barb what a lovely surprise!! The price was perfect :0)

Your house is almost overflowing with almost all your men home. Is the fifth one coming too?

I never took how-to classes when I got my Pfaff eons ago - probably should have - there are still things I don't know about it - and now it's outdated!!LOL

You are so funny. When I started reading I though you were referring to your sons and then wondered why would you pay one of them to work on a machine. LOL Then I read on. Glad everything worked out. Have fun with your boys while they are home. It's okay to feed them their favorites. That's what mothers do.

I'm so happy for you. It has to be so wonderful to have them all home. I'm glad it worked out with the machine, it's all about the dealer.

Wow no charge??!!! That is fabulous!!
Yummy looking food!! When can I put my order in?? LOL

Sounds like everyone is enjoying their family reunion. It's fun to spoil the kids when they have been out of the house for awhile.

Glad to hear you didn't have to pay to have your machine fixed. With all the fancy things these new machines can do classes sound like a good idea.

So happy for you..for the machine coming home without cost and for being surrounded by those boys you love. Spoil them..it's what we are here for!

Yay! I'm glad that you got your machine back and that you didn't have to pay anything...can't be that with a stick! And oh my goodness, Barb, all of those goodies look sooooo good. I'm sure your boys are in hog heaven with their mamma's home cookin'! :o)

Glad your "Big Guy" is back home - sounds like you got good service :o) Isn't that great when you have reputable dealers to work with. Sounds like you having fun spoiling those sons, too. Ummm, lasagna - what time's dinner??? Have fun -
Judie

Oh spoil those boys why you can!
My mother is gone now but I remember the smell of those sweet rolls coming out of the oven and being allowed to eat them warm with as much butter as we wanted! Those memories are as sweet as eating the rolls.

What fun having all those boys home. I would spoil them too!!I had a Janome for years and just loved it ,then two years ago I got a really good deal on an Elna which I understand is now made by Janome. I have one of those automatic cutting cutters to so thanks for advice on it. Have fun with all of those sons.

I'm so happy your Big Guy is Back! Hope you get back to sew great things! by the way you sound so much like my daughter, she love to cook & bake for her family, it's her way of saying don't leave me, help me eat all this..lol she just made made some sticky buns just the other day, mmmm so good! Your guys like you to spoil them! I agree with Kim, memories are as sweet as eating sweet rolls! Happy Sewing! :)

Are there any LEFTOVERS? Oh, welllll, I tried! So glad to hear such a happy ring in your words of all the boys being home ...

Now re sewing ... not! Those machines are too computerized & I have enough trouble typing.

Have a beautiful week ~
TTFN ~
Marydon

Actually my husband wants to be Michael Douglas bz he's married to Catherine Zeta Jones. Sigh...boy did he settle when he got me, lol!

Glad the machine is home again and that they were fair to you on the repair.

Oh by the way, those cinnamon roles look to dang yummy! We do love to spoil our kids don't we?!

it is what moms do, we fill their tummies with love!

You sound like a happy woman with your sewing machine fixed by nice people and your family around you. Enjoy.

Glad that you are happy and enjoying a wonderful family reunion!

I am a big believer in classes, especially those pertaining to your particular machine! So, I say take them. Some dealers actually offer them for free if you had bought the machine from them.

Your baked good look absolutely mouth-watering! I might have to invite myself over... :)

I thought of a 100 things to say, but those cinnamon buns definitely distracted me. Can you come over for breakfast tomorrow? w/cinnamon buns?

Very happy to hear Mr. Big is back home and they didn't charge you a service fee. Love a shop that stands by their product. Hopefully you can also get in some free hands on machine classes too, as there are probably many new tricks for tickling Mr. Big to delightful quilting.