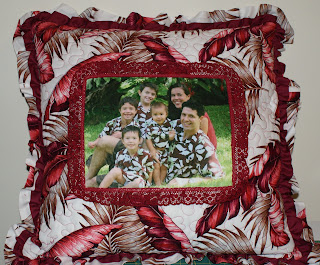 I made this pillow for my friend that did the quilt along. It matches her quilt. The funny thing is, this is for her birthday and I had to call her and ask her for the maroon fabric. I wanted it to match perfectly. I had the other material (which she gave me at the end of the quilt along).

She brought me the fabric and asked what I was doing and I think I said, just something. My husband heard her ask and when she left, he asked me what I said. I told him nothing....she was put off by it she told me but then she just decided that I would blog about it. Little did she know it was a Birthday present for her.

She is an awesome friend.

I stippled the pillow, then put the picture on and ruffle before I sewed it all together and stuffed it. The stippling took the most time because I had to figure Mr. Pfaff out...why don't men just come out with it instead of making us figure it out?

Wonderful job. How did you get the photo on the material. I have been looking but the printable is not cheap and I'm afraid to try and mess up. I would like to do a lot of them and it will cost a lot of money. This is just beautiful. Did you give it to her yet or is she seeing it on your blog first.

A wonderful birthday gift. I'm sure she loved it! Yes, she does have a wonderful looking family.

Mr. Pfaff has to be a little mysterious. It's like dating; you don't get to know everything about a man on the first date. Getting to know Mr. Pfaff is part of the fun.

Oh Barb that pillow is wonderful!! She is going to be so surprised and pleased. I love their family picture....look at all those smiling faces :0)

That came out really nice! What a lovely family.

The pillow looks great, Barb. Was she completely surprised by it?

I always like to bring the machine home first, play around with it and THEN go take classes on using it. That way I have questions that need to be answered. Do they give classes where you bought it?

She does have a beautiful family. The pillow is soooo nice. Is it ric rac around the pillow? In the picture it looks feathery to match the material. A really nice job, she will love it

What a gorgeous family and such a nice thing for you to do.

Well I think Mr. Pfaff is like most men you have to figure them out.

What a pretty pillow, I am sure she will treasure it. Yes, she does have a lovely family.

Great looking pillow. Before you know it you'll be privy to all of Mr. Pfaff's secrets.

Terrific pillow! I've had to do something similar to friends and family before. They're used to it now.

What a great gift! She has to be just thrilled with it!

Lovely pillow! I just bought a Mr. Pfaff myself, and I find that it takes time to get to know him. I hope it is just a transitional thing :)

SHe has a beautiful family and you did a lovely job on that pillow. How did you get the family pic?

YOu are a special friend to do that for her. When will you give it to her? I'm sure she will love it!

Barb, what a great birthday present! Love the picture in the pillow with the red borders.

she also has a lovely friend!

Nice family but AWESOME fabric!!! I love that fabric! I'd love a quilt made with it! Hint Hint! LOL I don't know how you put on the picture, but I've used a fabric medium that you put onto a photocopy of a picture and then wipe off (with lots of wipings with a wet sponge) and the ink from the picture is transferred into the fabric. Makes it very pretty as well. But this looks more like a glossy photo. So I'm curious, what was your method of getting the photo onto the fabric?

Barb, just love the cushion the photo goes with the material so well. Have a lovely weekend