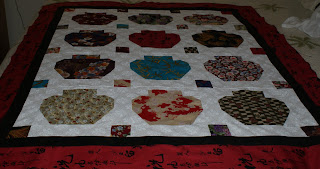 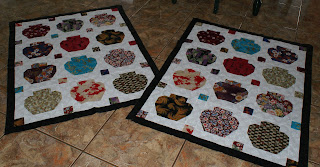 GINGER JARS BY Bea Yurkerwich from the October 2007 Issue of the"Quilters World" magazine. 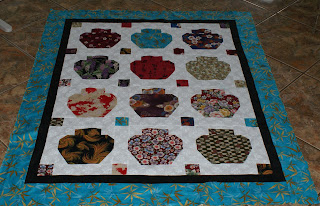 I am not happy with the red...the border is too wavy...I even took it out and re did it....but I did notice, even as I was making the ginger jars that the red was stretchy....and even when I went to put the border on, something in my head was questioning it...oh well...I just may stipple it and see if the stippling won't take care of it. I really like the red border???
I thought this would be a great way to showcase the material that Missy over at the Quilted Pig sent me.
at 8:00 AM

Barb, sometimes when the fabric is stretchy like that you can put a stabilizer (even thin paper will work) behind it till it is sewn,then rip the paper out. It can help with the waves you mentioned in the red one.

Those are beautiful! What a wonderful pattern for using Asian fabrics. I'm going to have to look for it.

Both of them are wonderful. LOVE them!

I like the red border too Barb. Love the quilts btw, ginger jars are my favorite jar type pattern. Did you use the fabrics from Missy?

The red is very Asian looking too. I like that pattern and you did a great job.

Oh, I like Gene's idea, but that will be for next time, this time, do not be so hard on yourself, I love it!!

They are both lovely.
what will you do with 2?

Yea, what will you do with 2? maybe one for an internet friend? hint hint...
For the waves, try laying it out flat somewhere and get the borders or whatever part is wavy, wet with a spray bottle, get it pretty wet. Then let it dry by itself...don't put in the dryer...if you can lay it in the sun, all the better. don't move it until dry, or you will stretch it.

Think of your blue jeans after you wash them.
Hope this helps.

One other thing I do if I know the fabric is stretchy is to cut parrellel with the selvage if you can, or spray with fabric sizing & iron dry before cutting.

Rage Against The Couch Potato said...

Talofa, Barb! The quilts are beautiful! I also love the Samoan fabrics you have in your store. I might purchase some in the future for clothing. I'm a Samoan, but my family is from Western Samoa. I'm also a beginning quilter and starting my first quilt.

I love your ginger jars!

Hi Barb, that happened with me with the Japanese quilt I made last year.....I unpicked the border and ironed interfacing on it..then restitched the border back.....that worked for me....it depends on the type of fabrics you use....In the body of the quilt I made it was quite firm but the border fabric was a different weight...hope this helps. Regards Lyn

I really like those and love the pattern. Great job!!