FUN TREASURES INSIDE THE DRAWERS OF THE SINGER RED EYE

So many of you had wonderful information about this machine which I was
so excited to learn. 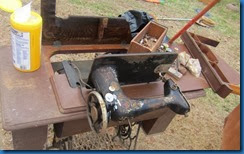 The drawers were packed full of things plus extra like dead bugs, bug poop, rat
pee…need I go on.  It was hard going through everything without gagging.  But my
greedy self did.
Here are some buttons, tweezers, sewing accessories.  Does anyone know what the long needle
like things are.  I thought they were tatting needles but there are no eyes.

Wooden spools.  I took a lot of the nasty threads off but left the ones
that were not too bad on.  The jar was mine. 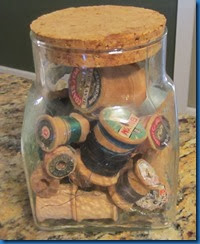 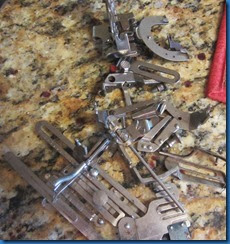 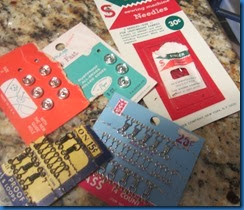 Tools I am guessing for the machine.  Those scissors still have the tag on it and
they cut like butter….yepeeeee  I lovvvvveee scissors. 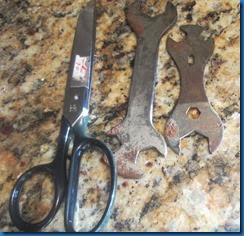 Now this is interesting.  I found it among a bunch of ribbons and material
that had been totally eaten up.  I couldn’t figure out how to open it until…..

It just folded out like this.  It had some accessories for the machine in it.
I have oiled the box and washed the inside. Personally I have not seen anything like this.
Extremely well made, I just need to replace the fabric on it..or not. 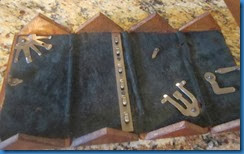 Thanks again for the useful information on the machine.  I have not had time to answer your comments
yet.
at 9:00 AM

Those needles look like dolls making tools to me. But, then..... What a lucky duck! Amazing someone would just walk away from this. But, then it fell into good hands.

That is called a puzzle box! Most of your attachments go in there. Mine has a date stamped on the front. Here is some info on it: http://www.thesewbox.com/2008/06/blog-post.html

Wow!! Lots of loot!! I love the box and wouldn't touch the original fabric. SCORE FOR YOU!!

What a fun box! I agree that the needle could be a doll needle. I wonder if a doll needle and a tufting needle are the same length?

What amazing finds. I agree the long needles are probably for attaching doll arms and legs. You need a really long needle to go from one side of the soft body to the other to attach them. The puzzle box is fascinating. I've never seen one before either. I love wooden spools too. I have a long string of them from my Grandma and my MIL's house that I keep on the door to my sewing room. I don't recognize any of the other attachments, but I'm sure you could google the machine and find out more. You're lucky to find such a trove of goodies!

What fun you are having discovering the innerds of the drawers! Are those darning needles? I did a post showing one of those machine attachment boxes (http://needledmom.blogspot.com/2013/09/sewing-museum.html). You certainly do not find workmanship like that anymore, do you? The new boxes are all plastic.

What great treasures Barb! Those long needle like items may be stilettos...just guessing here, but that would be my guess.

I'm enjoying the treasures you are finding. Really cool. You're going to be busy on eBay turning some of them into quilt shop money :)

I don't see that anyone else came up with my idea...AND it is just an idea. My first thought was that they were knitting needles for lace making. God only knows where the idea came from - I have some 'old' knitted lace made 80-100 years ago - maybe that's why.

So this is a question that probably has been answered but you know me, I miss things! When you bought your new home were these things that were left behind in the attic? How fun it must be to find sewing things! Oh so much fun Barb. Thanks for showing us the finds.

It appears that we are all being polite and not telling the truth....we are green with envy! LOL Such fun, and such great finds!

Wholey Schomkin Barb...you hit the proverbial jackpot of sewing loveliness. I have one of the puzzle boxes it was my grandmothers. It holds the sewing parts for the machine....I believe. Perhaps there will be an amazing Baltimore Album Quilt that has been perfectly preserved without all the bug and rodent business....that would get me on a flight tonight just to claim it...ROFL.

Love you and if anyone deserves to find some treasures...it sure is you!

Wow, barb you have found the Treasures of all Treasures!! I wish for you so much happiness in your new home and to reading your post, its like keeping in touch with family. Hugs, Marie

I guess going through those icky drawers was the price you had to pay for your treasures :)

Those are awesome finds and yes I am green but you do deserve to find all those good treasures.

I sure have been missing out on some cool post! WOW!!!